My fellow fantasy blogging friend Christina Hawthorn asked me to join the writing process blog tour and I’d like to thank her for this terrific opportunity. Blog tours are such a treat and I love meeting new bloggers and readers.  Christina writes over at Ontyre Passages, if you have a minute go over there read her post about her writing process.  Over at her blog you’ll also find her ongoing fantasy serial – Last Word Before Dying, poetry, an exploration of her fantasy world maps, and all sorts of other great stuff.

This tour asks four questions that I’ll do my best not to butcher, starting with: 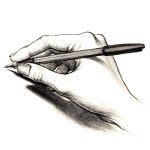 What am I working on?

My current, and largest, project is the first book in an epic fantasy trilogy and is tentatively titled Stonebearer’s Betrayal. I’ve chipped away at this book for almost six years developing the story and refining the characters all while learning about the craft of novel-writing. The story revolves around an apprentice and his quest to protect the world from a demon that his master has accidentally freed.  I’m hoping to shine it up enough by the end of the year to start approaching agents and publishers, and this year I mean it.

When I’m not slogging through the beast of my manuscript, I blog here about the art of writing and also at my other blog where I post short fiction, humorous “slice-of-life” essays, and whatever catches my interest.  There is also a serial fiction there called The Man in the Cupboard about a tiny tinker man in search of love.

I also have a few short stories in various genres that I’m shopping around for publication.

How does my work differ from others of its genre?

Epic fantasy is unique in the fact that there are so many possibilities, which is why I like it.  I choose not to include some of the standard players so you won’t find any elves, dwarves, dragons, or goblins.  Instead, I choose to focus on having strong relatable characters and a great story, which for me has lots of danger, magic, and a little romance.  I’ve also included a killer magic system, secret societies, immortals, and a few other surprises.

Why do I write what I do?

Although this is true for all writers to some degree, I find writing fantasy a fascinating way to explore ideas.  Finding and exploring the “new”  is especially true for fantasy writing where it is necessary if not expected to dig deep into new and uncharted realms and people.   I love the flexibility of creating my own worlds with their own cultures and traditions where wondrous and strange things can happen.

How does my writing process work?

I wish I could say I had a fantastic structure to my writing process and that it worked wonders for my creativity, but the truth is I continue to change and grow.  When I started, I would write all the good scenes first and then hope to fill in the holes later.  Not only did this create a fragmented and chaotic mess, it was a bear to keep organized.  I couldn’t get a good feel for my characters either and that was a huge problem.

Now I tend to loosely outline what needs to happen and then dive in and free write like crazy.  I’m a big believer in the Anne Lamott method of pouring everything out for a scene and creating a super crappy first draft.  Giving myself permission to make a truly awful first draft frees up my creativity and then the ideas and character tidbits and setting snapshots can flow over the page.  Later I go back and refine those ideas while I edit, keeping the best and tossing out the rest.  I don’t let myself skip scenes that I don’t want to write to get to the good bits anymore, it is often while writing those often tedious in-between scenes that I learn the most about my characters and what makes them unique.

As for a schedule, I squeeze in whatever writing time I can find when the kids are at school and my youngest is napping or snuggled up watching a movie.  While that doesn’t result in a lot of time everyday, usually no more than an hour, maybe two if I’m lucky,  I keep telling myself that every small step adds up over time.

I’d like to pass the torch on to a pair of my writing friends from the American Night Writers Association who are not only are talented writers but also have been a great support to my writing career as well:

Nicole White is a trying-to-get-published author who also loves cosplay and backyard farming. She’s lived in over 15 different locals and home schooled 5 children for over 20 years. When not writing she happily herds chickens, cats, and the two teenage boys left at home. She blogs at http://nicolemariewhite.blogspot.com/

Tara Mayoros is an author, artist, baker, music teacher, gardener, and nature lover. She sees the beauty in the process, and the miracle, of creation. The mountains are her home and they call to her whenever she finds herself in need of inspiration. Her debut Women’s Romance Novel BROKEN SMILES is set for a Fall 2014 release by Astraea Press. She blogs at  http://taramayoros.com
Advertisement

Jodi L. Milner is a writer, mandala enthusiast, and educator. Her epic fantasy novel, Stonebearer’s Betrayal, was published in November 2018 and rereleased in Jan 2020. She has been published in several anthologies. When not writing, she can be found folding children and feeding the laundry, occasionally in that order.
View all posts by Jodi →
This entry was posted in Art of Writing, Editing and Revision, Writing and tagged #mywriting, American Night Writers Association, ANWA, blog tour, Creativity, fantasy, fiction, links, novel writing. Bookmark the permalink.