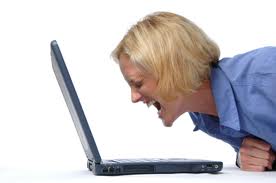 Lately it seems like all I’ve been doing is apologizing, and well, I kind of have been.  With the kids being off track and a handful of stressful projects hanging over my head sometimes I let the blogs take a break.

Today, I intended on writing a brilliant piece comparing writing processes of pre-computer authors compared with some of the processes of today’s authors.  It was going to be a winner, for sure, maybe even nominated for some sort of a award even.  Who am I kidding? That topic would be fascinating, however… I’ll have to come back to it.

Ok, I had nothing. But, I was going to turn that nothing into a marvelous something before the morning was over and then post it just for you.

Instead, Mr. PC decided that instead of waking up and being ready to work, it would tease me with the windows splash screen and then go black and utterly useless.

Thank heavens for smart phones and Google.  After a few searches and other weird voodoo, which might or might not have included the blood of a virgin, I found the magical sequence to reanimate the dead and bring my creation back to life! Whoops, channeled Dr. Frankenstein for a moment there.

Now I’m off to back up everything on this computer before something even more sinister comes my way.

Stay tuned for next week where I’ll be taking part in a blog tour all about writing processes!

Jodi L. Milner is a writer, mandala enthusiast, and educator. Her epic fantasy novel, Stonebearer’s Betrayal, will be published November 2018 by Immortal Works Press. She has been published in several anthologies. When not writing, she can be found folding children and feeding the laundry, occasionally in that order.
View all posts by Jodi →
This entry was posted in Uncategorized and tagged blogging, computer trouble, funny, Humor. Bookmark the permalink.