Interview with Joni B. Cole

Today’s we have the pleasure of hearing from Joni B. Cole, author of Toxic Feedback, Helping Writers Survive and Thrive.  This book is a must for anyone who is in the position of giving feedback on another’s work, including fellow writers, teachers, and workshop peers.  On to the interview!

First of all, tell our readers all about your book Toxic Feedback, Helping Writers Survive and Thrive.

This book is for anyone who wants to write more, write better, and be happier (because who isn’t happier when they’re writing more and writing better?)! In a word, the focus of the book is on feedback, one of the best resources we have when it comes to staying motivated throughout the creative process, and doing our best work.

The book also serves feedback providers, from instructors to workshoppers, showing them how to  provide meaningful, measured responses that a writer can actually hear, and use to move their work forward.

And for both feedback receiver and provider, the (ironically titled) Toxic Feedback demonstrates the power of positive feedback.

What was your inspiration behind its creation?

Like almost every writer on the planet, I had experienced my own share of toxic feedback, most notably in the form of a graduate school instructor telling me the short story I’d labored on for months was “all wrong.” But how did this snarky comment help me improve my work? What was I to do with that kind of generalized dismissal? That inane comment really set me back as a writer because it pulverized my confidence, and one of these days, I’m going to let that instructor hear about it!

Of course, as it turns out, my toxic feedback story was mild compared to the hundreds of others I’ve heard from writers across genres. (Take a couple seconds—that’s all it will probably take—to think of your own toxic feedback story, some comment that made you feel bad about your work or yourself as a writer.)

But here’s an important point. I don’t think the reason for all this nasty feedback out there is because most workshop members or writing instructors are toxic people. I think it’s simply because people don’t pay enough attention to the feedback interaction—What works to motivate? What sets writers back?

With Toxic Feedback, I wanted to write a book that would rid the world of those damaging and useless responses. I wanted to raise our consciousnesses as feedback receivers and providers, to show people on both sides of the interaction that with a little more awareness and a few tips, feedback can be the opposite of destructive. In fact, it can and should make our writing lives much, much nicer.

Why is positive feedback so important for writers?

When I start talking about positive feedback, some people look askance and automatically assume I’m just one of those “touchy feely” types. I’m not. (Though I actually like touchy feely types and think the world could use more of them.) When I tout positive feedback, it’s not just because it strokes the writer’s ego, and makes everybody feel happy. My point is that positive feedback is the BEST way to get writers to write more and writer better. People actually learn more when the conversation focuses as much (if not more) on what is working in their text and why, rather than its deficits. In this way, the writer can build her work from its strengths up.

I also want to reinforce that my positive model of feedback doesn’t exclude constructive criticism. And it’s got nothing to do with coddling writers or giving false praise: “Oh I love your work… Oh I love yours.” Those may be positive words, but they’re not enough. My point is that all feedback should have a positive effect – even when it is negative—because every aspect of the feedback interaction should leave the writer feeling good about herself, feeling supported, and feeling motivated to do another draft, and another, and another…

Are there any projects that you are currently working on that you can tell us about?

I have a collection of personal essays coming out entitled Another Bad-Dog Book: Tales of Life, Love, and Neurotic Human Behavior. (PublishingWorks, Sept. 6, 2011). The book falls into the “humor” category, but I like to think of it as humor that matters. My subject matter ranges from tracking down my secret crush in high school, to my over-attachment to my dog, to trying to talk (and talk and talk) my way through a mid-life crisis.

Because the book is three months out from publication, I’m just entering the phase of shameless self promotion and publicity wrangling—trying to round up early reviews and awareness for the book before its release date. So if anyone is interested in doing an article, or booking me for a fall interview… (Now you know why I used the word “shameless”.)

What helped you decide that writing was what you wanted to do with your life?

Writing has never been particularly easy for me. Still, for most of my life I did get a lot of positive responses to my words and stories. And that praise and attention always makes my head swell. So I keep doing it. In addition, it is so satisfying when I know I have something I really want to communicate, whether it’s about writing or a theme in my life, and I actually manage to “package” it in a way that is entertaining and meaningful to readers.

What’s the #1 best piece of advice for writers you have ever heard?

Find or start a writing community. Don’t go it alone. Spend time with other writers. Swap stories-in-progress. Seek out readers during the creative process. Cheer on these other members of your writing community; whether we’re newbies or award-winning novelists, we all need support. Yes, writing is a solitary act, but it doesn’t have to be a lonely one.

Oh, and here’s one more bit of very practical advice that I love. It’s attributed to William Carlos Williams: “No ideas but in things.” At first, I didn’t even know what that meant. But then I figured it out. You can’t write about “love”—at least not in a way that’s going to resonate. But you can write about the locket your sixteen-year-old protagonist swears she’ll never take off after her rapper boyfriend gives it to her. Similarly, you can’t write about grief, but you can write about that empty box of Kleenex, and how the grief-stricken mother can’t even muster the energy to leave the house and go to the store to buy another box. “Things” give us an easy entry into our stories…and allow us to capture the big ideas we want to write about in the most concrete of ways. 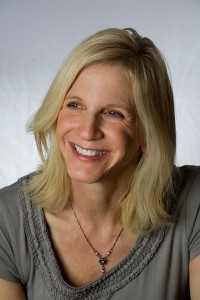 Joni B. Cole is a frequent educator and speaker at writing conferences around the country.

She is the author of Toxic Feedback: Helping Writers Survive and Thrive, which is “strongly recommended” by Library Journal for students, teachers, and workshops. She is also the founding creator of the acclaimed “This Day” book series, including Water Cooler Diaries: Women across America Share Their Day at Work (“both fascinating and eye-opening,” according to Publisher’s Weekly). Nominated for a 2011 Pushcart Prize, Joni has published several essays in literary journals, and is a contributor to The Writer magazine.

Look for her new book of essays, Another Bad Dog Book: Tales of Life, Love, and Neurotic Human Behavior, in bookstores this September.

For information about her three-day writing retreats at the Highland Lake Inn in Andover, New Hampshire, see the retreat webpage.

To contact Joni, email her or find her on Facebook. You can also follow her on Twitter (@jonibcole). She is available for writing consults and speaking engagements, and would love to hear from you.

A big thanks to Joni for sharing about her book with us today!  Readers are welcome to leave questions and comments for Joni below.

Jodi L. Milner is a writer, mandala enthusiast, and educator. Her epic fantasy novel, Stonebearer’s Betrayal, was published in November 2018 and rereleased in Jan 2020. She has been published in several anthologies. When not writing, she can be found folding children and feeding the laundry, occasionally in that order.
View all posts by Jodi →
This entry was posted in Editing and Revision, Guest Post, Marketing and Publication and tagged art, Feedback, guest, interview, Joni B. Cole, Positive feedback, Toxic Feedback, writer, Writers Resources. Bookmark the permalink.

11 Responses to Interview with Joni B. Cole