“Even a happy life cannot be without a measure of darkness, and the word happy would lose its meaning if it were not balanced by sadness. It is far better take things as they come along with patience and equanimity.”

“Great talents are the most lovely and often the most dangerous fruits on the tree of humanity. They hang upon the most slender twigs that are easily snapped off.”

“Knowledge rests not upon truth alone, but upon error also.”

“Man’s task is to become conscious of the contents that press upward from the unconscious.”

“One looks back with appreciation to the brilliant teachers, but with gratitude to those who touched our human feelings. The curriculum is so much necessary raw material, but warmth is the vital element for the growing plant and for the soul of the child.”

“The meeting of two personalities is like the contact of two chemical substances: if there is any reaction, both are transformed.”

“Without this playing with fantasy no creative work has ever yet come to birth. The debt we owe to the play of the imagination is incalculable.” 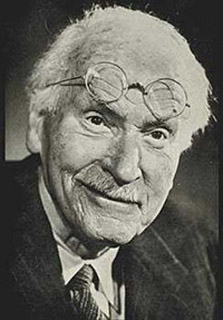 Carl Gustav Jung is the Swiss psychiatrist whose importance in the history of psychoanalysis rivals that of Sigmund Freud. Early in his career Jung worked at the Burghözli mental clinic in Zurich (1900-09), and later he held professorships at universities in Zurich (1933-41) and Basel (1944-61). His early working relationship with the veteran Freud, begun around 1906, deteriorated as Jung became increasingly critical of Freud’s insistence on the psychosexual origins of neuroses. After Jung published The Psychology of the Unconscious in 1912, their theories diverged and Jung developed his own school of “analytical psychology.” His world travels led to an interest in ideas from Eastern philosophies and religions, which he integrated into his theories of the “collective unconscious.” His most famous books include Psychology and Religion (1937), The Undiscovered Self (1957) and his autobiography, Memories, Dreams, Reflections (1962).

The name is pronounced yoong… His work introduced the concepts of “introvert” and “extrovert.”

Jodi L. Milner is a writer, mandala enthusiast, and educator. Her epic fantasy novel, Stonebearer’s Betrayal, was published in November 2018 and rereleased in Jan 2020. She has been published in several anthologies. When not writing, she can be found folding children and feeding the laundry, occasionally in that order.
View all posts by Jodi →
This entry was posted in Quickly Quotable and tagged biography, Carl Jung, psychology, quotes. Bookmark the permalink.