Fablehaven: The Keys to the Demon Prison (Book #5)

I have finally finished the Fablehaven series.  Overall, I give it a 5 out of 10.  It’s readable but not as compelling as I would have hoped. A kid would think it’s great – lots of action and adventure.  As an adult each book felt like the same story with the elements switched around.

Thankfully book five doesn’t follow the same pattern as the previous four.  The puzzle sequence where the characters must figure out clue after clue happens at the beginning instead of the end.  In this book the sequence is much longer because there are two groups of characters on separate quests.  The climax is not finding another artifact but an epic battle sequence. No surprise there.  Instead of a betrayal there is a dramatic change in who is considered the enemy.

My biggest writing issue is with the dialogue.  It comes across as stilted and awkward more often than not.  His characters keep using words that don’t seem natural to who they are.  In addition to awkward dialogue there is an adverb crises of epic proportions. The whole manuscript is littered with them. My favorite example:

Two in the same sentence!  Arrgh!  I admit I’m hypersensitive to adverbs but that is unforgivable. Is emptily even a word? 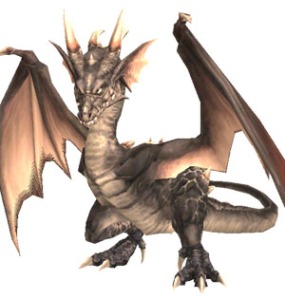 Ladies and gentlemen, a wyvern. In essence it's the ugly, evil, no armed giant chicken of the reptile world.

Dearest fantasy writers and those who would use non-standard creatures in their writing.  If it’s not an elf, fairy, troll, gremlin, goblin, unicorn, centaur, dragon or any of the other standard recognizable fantasy creatures, please do us all a favor and fill us in on what it is.  Mull uses bizarre creatures that I am not familiar with and makes little effort to tell the reader about them.  His personal favorite must be the wyvern, he uses it over and over.  At the end of the book I still don’t know it is and at this point I don’t care.

I sound needlessly cruel, and I shouldn’t.  After all, Mull has managed to get published and do very well locally.  I haven’t, yet.  I give him credit for creating a fun set of characters, story twists, betrayals, unexpected allies, magical concepts, and active fight scenes.  It still can be enjoyed, but it’s no Harry Potter.

It would however make a fantastic video game.  Something in the RPG (role-playing game) category with puzzles to solve, strange lands to explore, and battles to win.   The story is set up perfectly for it!

Links to my reviews of the other books in this series:

Fablehaven: Rise of the Evening Star (#2)

Fablehaven: Grip of the Shadow Plague (#3)

Fablehaven: Secret of the Dragon Sanctuary (#4)

Jodi L. Milner is a writer, mandala enthusiast, and educator. Her epic fantasy novel, Stonebearer’s Betrayal, was published in November 2018 and rereleased in Jan 2020. She has been published in several anthologies. When not writing, she can be found folding children and feeding the laundry, occasionally in that order.
View all posts by Jodi →
This entry was posted in Books and Reading, Concept Creation and tagged adverbs, Books and Reading, Brandon Mull, dialogue, fictional creatures, grammar, literature, Writing. Bookmark the permalink.

2 Responses to Fablehaven: The Keys to the Demon Prison (Book #5)