“All experience is an arch wherethrough gleams that untravelled world whose margin fades for ever and for ever when I move.”

“Guard your roving thoughts with a jealous care, for speech is but the dialer of thoughts, and every fool can plainly read in your words what is the hour of your thoughts.”

“And out of darkness came the hands that reach thro’ nature, moulding men.” 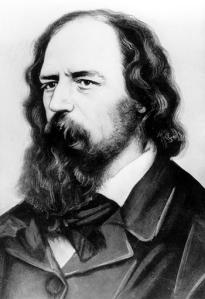 Tennyson, Alfred Lord (born Aug. 6, 1809, Somersby, Lincolnshire, Eng. — died Oct. 6, 1892, Aldworth, Surrey) English poet, the leading poet of the Victorian age. While attending Cambridge University, Tennyson developed a deep friendship with Arthur Hallam. His reputation as a poet increased at Cambridge, and he published Poems, Chiefly Lyrical (1830). Another volume, including “The Lotos-Eaters” and “The Lady of Shalott,” was published in 1832 (dated 1833). Hallam’s sudden death in 1833 prompted Tennyson to write poems that eventually became part of the vast In Memoriam (1850) and lyrics that later appeared in the brooding Maud (1855), his favourite poem. Poems (1842), including “Ulysses,” “Morte d’Arthur,” and “Locksley Hall,” followed, then The Princess (1847), a long antifeminist fantasia that includes such lyrics as “Sweet and Low” and “Tears, Idle Tears.” In 1850 he married; that year he was also named poet laureate of England. Among his subsequent works are “The Charge of the Light Brigade” (1855); Idylls of the King (1859), treating the Arthurian legend; and Enoch Arden (1864). A consummate poet who was inclined to melancholy, Tennyson was also regarded as a spokesman for the educated English middle class. His works often dealt with the difficulties of an age when traditional assumptions were increasingly called into question by science and modern progress.

A day may sink or save a realm.
Alfred Lord Tennyson

A lie which is half a truth is ever the blackest of lies.
Alfred Lord Tennyson

A smile abroad is often a scowl at home.
Alfred Lord Tennyson

All experience is an arch wherethrough gleams that untravelled world whose margin fades for ever and for ever when I move.
Alfred Lord Tennyson

And out of darkness came the hands that reach thro’ nature, moulding men.
Alfred Lord Tennyson

Jodi L. Milner is a writer, mandala enthusiast, and educator. Her epic fantasy novel, Stonebearer’s Betrayal, will be published November 2018 by Immortal Works Press. She has been published in several anthologies. When not writing, she can be found folding children and feeding the laundry, occasionally in that order.
View all posts by Jodi →
This entry was posted in Quickly Quotable and tagged alfred lord tennyson, biography, English poet, poet, poetry, quotes, tennyson. Bookmark the permalink.