Recently I was looking through submission guidelines on a site and stumbled across one that shocked me.  To be considered for this particular publication you must only use one space between sentences.

When did this happen?!?  I’ve never heard of only using one space between sentences and now it might be grounds for rejection. This site was taking submissions for full length novels.  The idea of having to go in and remove one space between each sentence throughout a whole book was enough to consider not submitting to the site.  Not that I’m ready to submit yet anyway.

I guess this is serious, so I did some research (meaning I read what Wikipedia had to say about it).  Here’s what I learned: 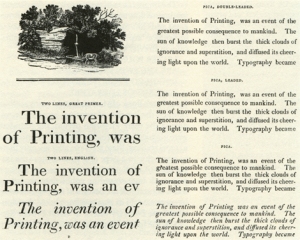 The practice of using a single space after the end of a sentence is called French Spacing.  Using two spaces is referred to as English Spacing.  This was during the pre-typewriter era where typesetters used different spacers depending on regional preference.  Typewriters changed things; a single space didn’t look wide enough to signify the end of a sentence.  Thus the birth of the double space between sentences; what I learned in my Jr. High typing class.

With the birth of the word processor and proportional fonts the extra space is no longer needed.  A proportional font is smart enough to adjust the spacing after each character and punctuation mark to make the text look its best.  According to Mr. Wiki:

Publishers usually require manuscripts to be submitted as they will appear in publication—single sentence spaced.[86] Writing sources typically recommend that prospective authors remove extra spaces before submitting manuscripts,[87] although publishers will use software to remove the spaces before final publication.[88] Finally, some experts state that, while double spacing sentences in unpublished papers and informal use (such as e-mail) might be fine,[89] double sentence spacing in desktop-published (DTP) works will make the final result look “unprofessional” and “foolish”.[90]

For those of you who choose to take publishing into your own hands, be aware; some snobbish person will think those double spaced gaps between sentences are unprofessional.  The rest of us don’t frankly care.

Want to read more about it?  Check out the  Wiki article “Sentence Spacing”

Jodi L. Milner is a writer, mandala enthusiast, and educator. Her epic fantasy novel, Stonebearer’s Betrayal, was published in November 2018 and rereleased in Jan 2020. She has been published in several anthologies. When not writing, she can be found folding children and feeding the laundry, occasionally in that order.
View all posts by Jodi →
This entry was posted in Grammarland, Technology and tagged English spacing, French spacing, grammar, sentence spacing, spacing, Technology, typewriter, typography. Bookmark the permalink.

15 Responses to The Great Space Debate