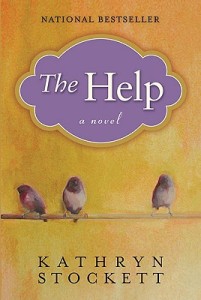 After hearing so much about this acclaimed début novel I had to read it.  Kathryn Stockett has created a captivating tale about what life was like for black housekeepers in Mississippi and the attitudes that prevailed during the early 1960’s.

The story itself twists and turns, leading the reader on a path of discovery from one household to the next.  Stockett takes time to familiarize the reader with the lives and personalities of each principle character before moving to the next.  While this isn’t a traditional way of starting a book, in this instance it works well.  When the heart of the story begins to unfold the reader already understands why the issues are so important to the character.  The characters are interesting enough that the process of learning about their lives is just as fun to read about as the plot.

One of the greatest strengths of Stockett’s writing is her talent for capturing dialect.  I became so immersed in the language that after putting the book down between readings I’d find myself thinking and talking with a southern accent.  Not many people realize how incredibly difficult it is to write dialect until they’ve tried – for me, I don’t plan to try anytime soon.

I fell in love with Stockett’s characters, Skeeter, Aibileen, and Minny.  Each was so wonderful in their unique outlook on life.  At the end of the book I wanted to know more about what happened to them along with the other families.

Congratulations to Stockett for creating a fantastic book around a difficult subject; I give it two enthusiastic thumbs up!

The New York Time’s review of “The Help”

Jodi L. Milner is a writer, mandala enthusiast, and educator. Her epic fantasy novel, Stonebearer’s Betrayal, was published in November 2018 and rereleased in Jan 2020. She has been published in several anthologies. When not writing, she can be found folding children and feeding the laundry, occasionally in that order.
View all posts by Jodi →
This entry was posted in Books and Reading and tagged accents, Books and Reading, dialect, Kathryn Stockett, southern help, Stockett, The Help, Writing. Bookmark the permalink.

4 Responses to Book Review: The Help by Kathryn Stockett